Reaching the Intersection of Rice and Pears 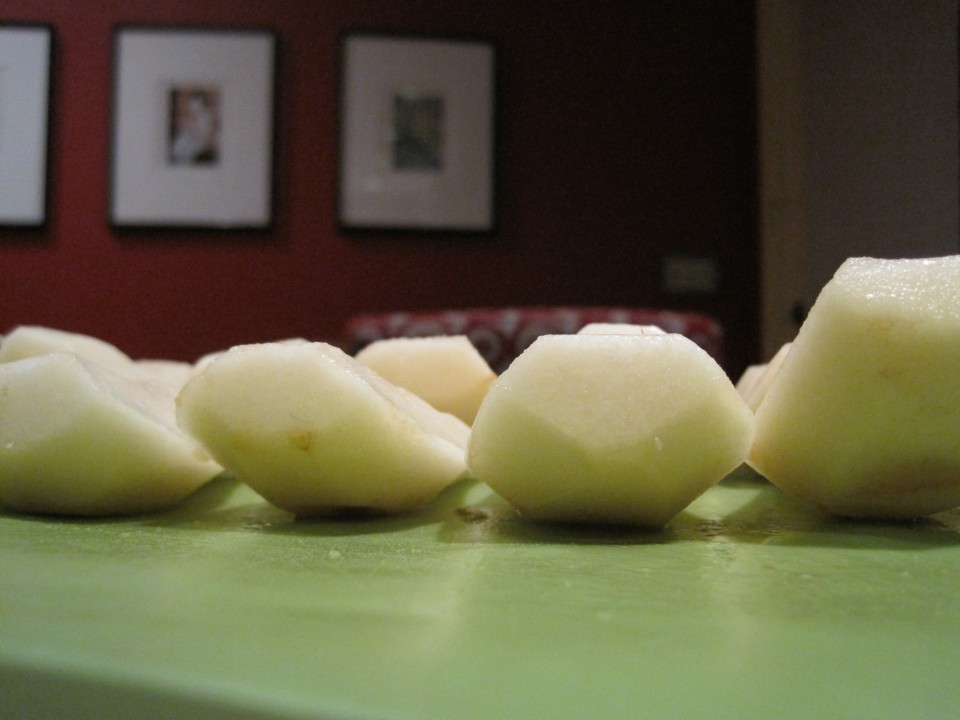 I love to travel, experiencing the people, the sights, the food, the foreignness of other places, and I have done my share.

I have arrived in Paris on a Sunday without money.  Encountered a flasher outside of Strasbourg Cathedral.  Been violently seasick on a ferry between Iceland and Heimaey.  Sat down to dinner with relatives in Edinburgh as they pulled an extra chair to the table for their recently departed dog.  Helped clear a flue to light a fire at a home in Ireland and come face to face with a long dead but pristinely preserved jackdaw.

All the experiences make for indelible memories, and I wouldn’t trade one.  Not the flasher, not the jackdaw, not even the time I was mistaken for a streetwalker in Munich.  But I do regret I haven’t yet traveled to Italy.

Not long before my father died, he took a trip with his brother to Rome to investigate some property in Tivoli that they had recently learned belonged to them and their siblings.  A few times over the next couple of years, I badgered my father to write an account of his trip.  Since I hadn’t been myself, I wanted to know what they saw, what they ate, what the Tivoli property looked like, and what they learned about their Italian cousins.

Eventually I wore him down and he began jotting.  He wrote about sampling olive oil and wine.  He told me his cousins were doctors and lawyers and very gracious hosts.  He added a note about being surprised at dirt floor of the historic home in Tivoli and the chickens running in and out.

His writing loosened up when he began describing their arrival in Rome – the two brothers, one the oldest of the family, the other (my uncle) the baby, dressed alike in polo shirts and white polyester shorts and new white sneakers walking into their hotel.  He went on for several paragraphs about the stares and the strange way people looked at them in their trim white clothes, knees showing as they went about the city on that first day, and how he and Uncle Dick eventually determined that they were being mistaken for a couple instead of brothers.  They decided to do nothing to correct the impression, and how they laughed at this, he wrote, the inside joke.

I am determined to travel to Italy as soon as I can.  Until then, I have my Twitter friends at Academia Barilla to bring the food of Italy to me with the recipes they post daily.  It’s like being at their cooking school in Parma, learning the Italian ways of cooking regionally and seasonally firsthand.  Well, almost.  And for now, almost will have to do.

Last week, Academia Barilla brought me to Milan, right to the intersection of sweet and savory with this recipe for Risotto with Gorgonzola and Fresh Pears.  Many readers may be familiar with ending a meal with a sliver of blue cheese and a perfectly ripe pear.  This Milanese risotto relies on the same principle of balance: that in the best and most satisfying dishes, salty should be balanced with sweet, and sharp with mellow.

I used my favorite Gorgonzola Dolce, salty and slightly sharp but with a sweet cream finish that disarms and charms any people who think they won’t like a blue cheese. I did the pears a bit differently than the original recipe instructed: I left them in slices rather than pureeing, and then caramelized the slices, adding an herbal, acidic edge to the densely sweet Concorde pears for that extra punch of contrast. 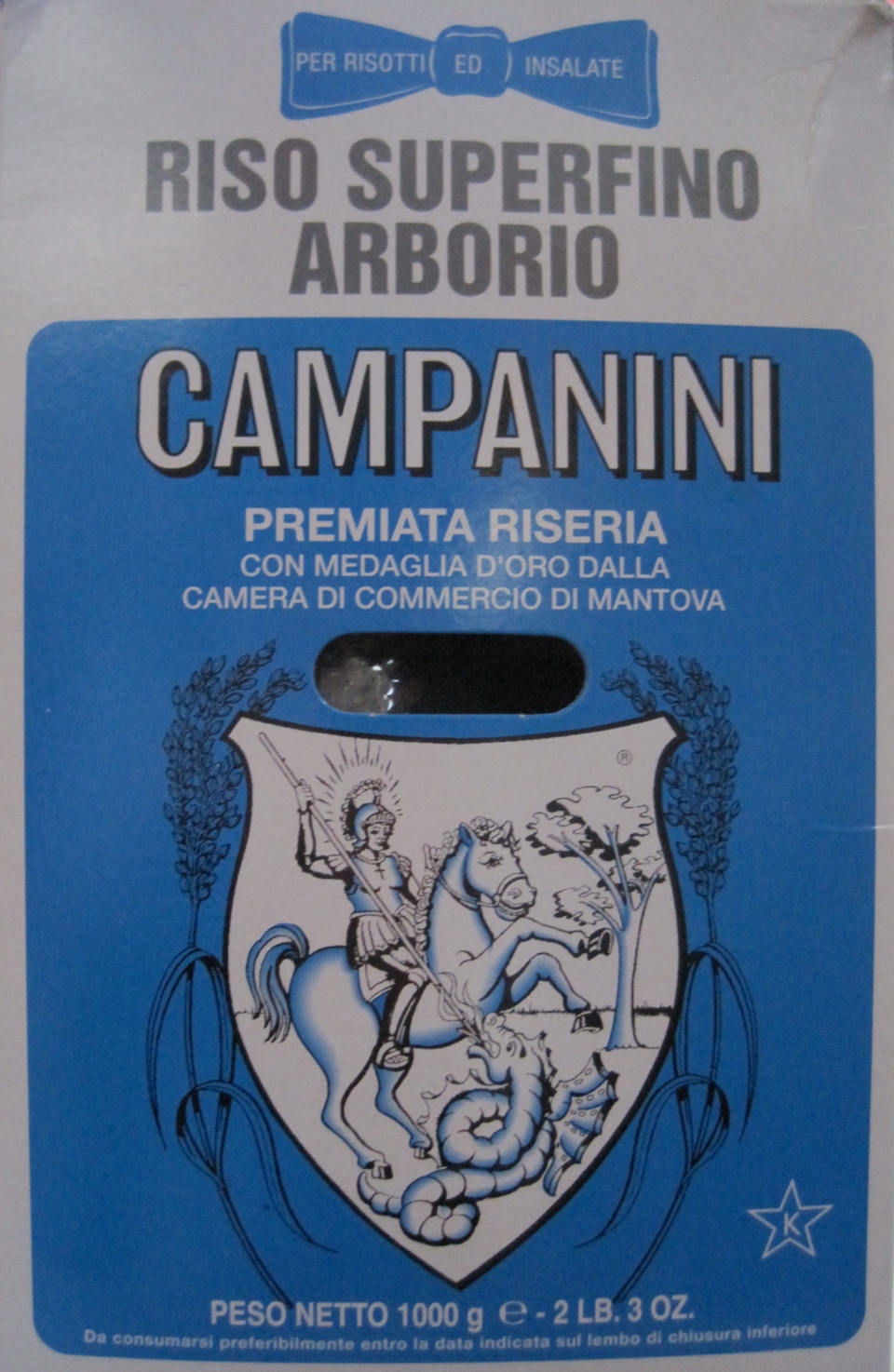 Risotto with Gorgonzola and Pears 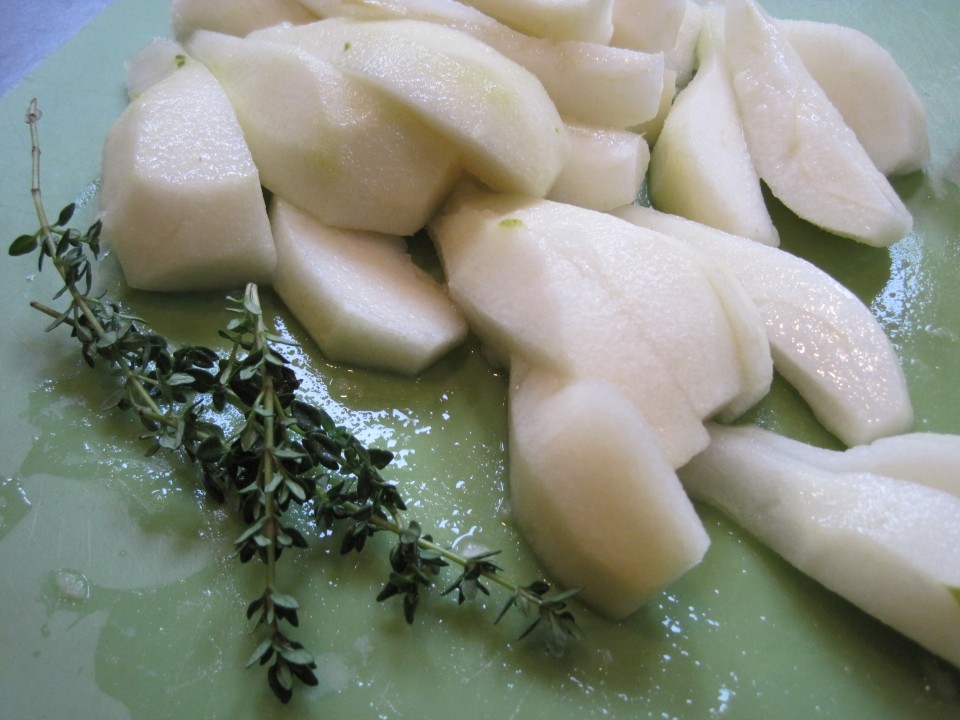 Heat the butter over medium heat in a saute pan large enough to hold all the pear slices.  Once the foaming subsides, add the thyme sprigs and pears to the pan. 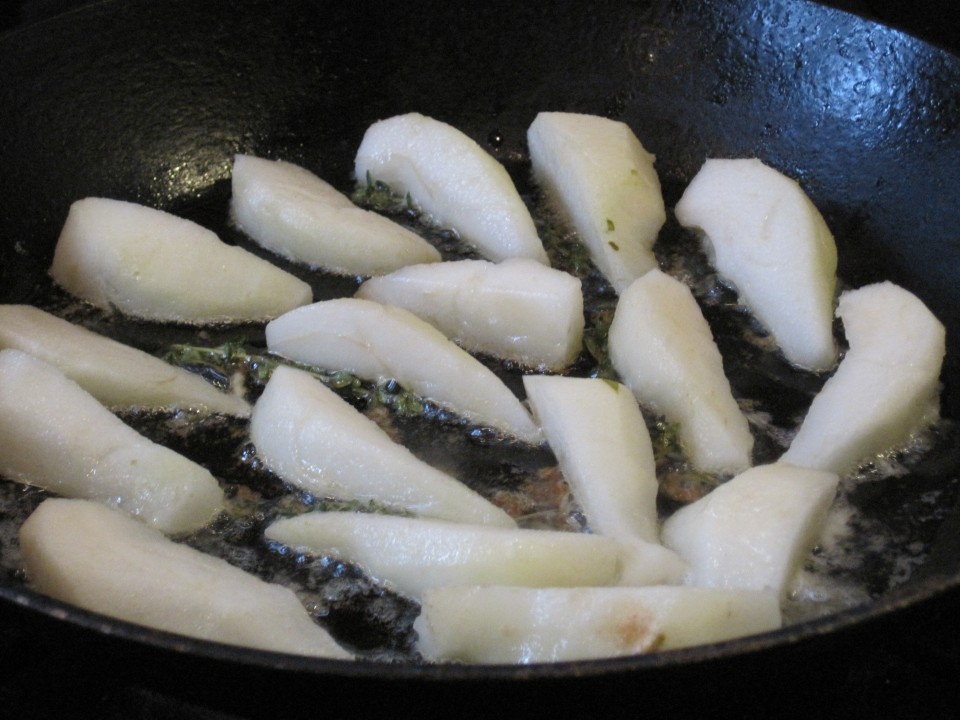 Gently brown the pears on two sides.  Remove the slices to a plate or board and set aside. 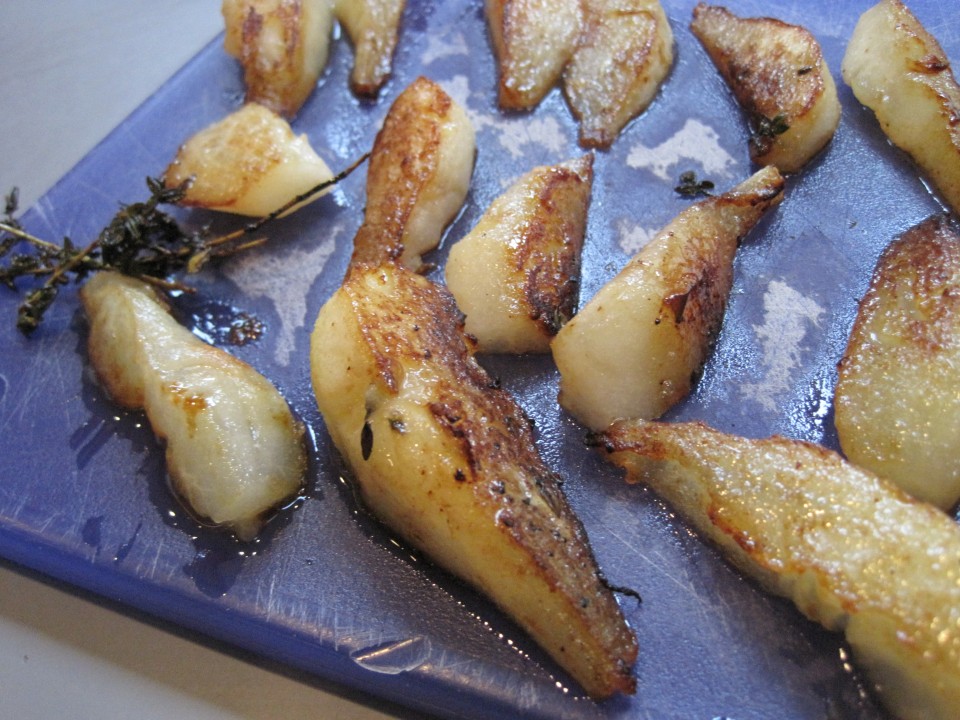 Remove the thyme sprigs and discard.

Add the vinegar and the boiled cider to the hot pan.  Cook until the two blend and reduce to a slightly thickened syrup.  (If using apple cider, this will take longer.)  Return the pears to the pan and turn in the syrup to coat.  Remove the pan from the heat for the time being.

Place a large shallow dutch saute pan over medium heat. Add the oil and, once hot, add the onion.  Cook slowly, stirring often, so that it doesn’t brown. Add the rice and stir to coat with the oil.  Cook gently until it becomes translucent. Add a pinch of salt.

Add a couple ladlefuls of broth to the rice. Stir constantly after you add the broth.  Once most of the liquid has evaporated, add more broth and continue stirring the rice.  Continue adding broth by the ladleful as it is absorbed, and cook while stirring until the rice is al dente, or just barely tender. This will take about 20 minutes, give or take. When al dente, remove the pot from the heat and add half the Gorgonzola and butter, cut into pieces. 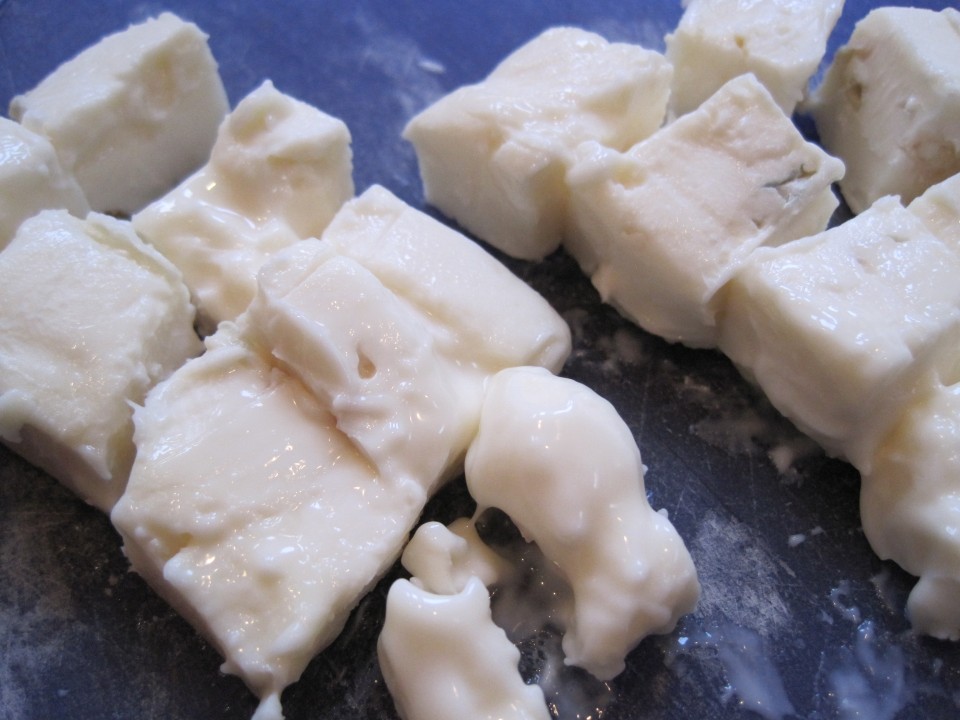 Stir these into the rice and cover the pan. Let rest for two minutes.

Turn on the heat under the pears, set it to low, and let them warm up again while you finish the risotto.

Uncover the risotto pot and add the remaining Gorgonzola and Parmigiano-Reggiano. Stir until creamy.

Place some pear slices into the bottom of individual bowls or plates and spoon the risotto on top.  Serve with freshly ground pepper and extra shaved parmesan if desired. 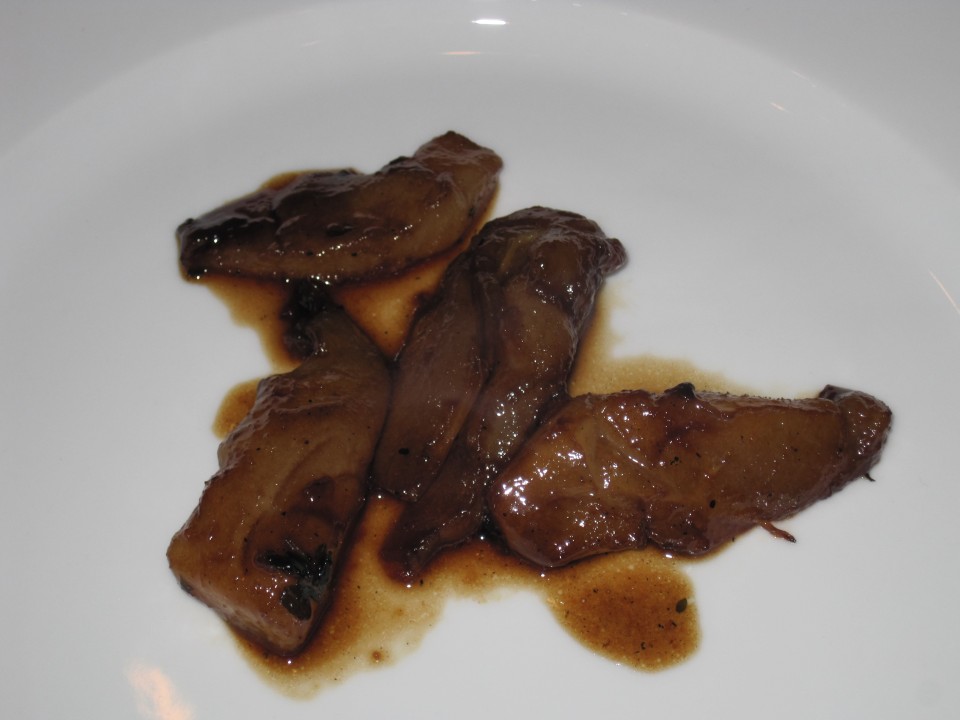 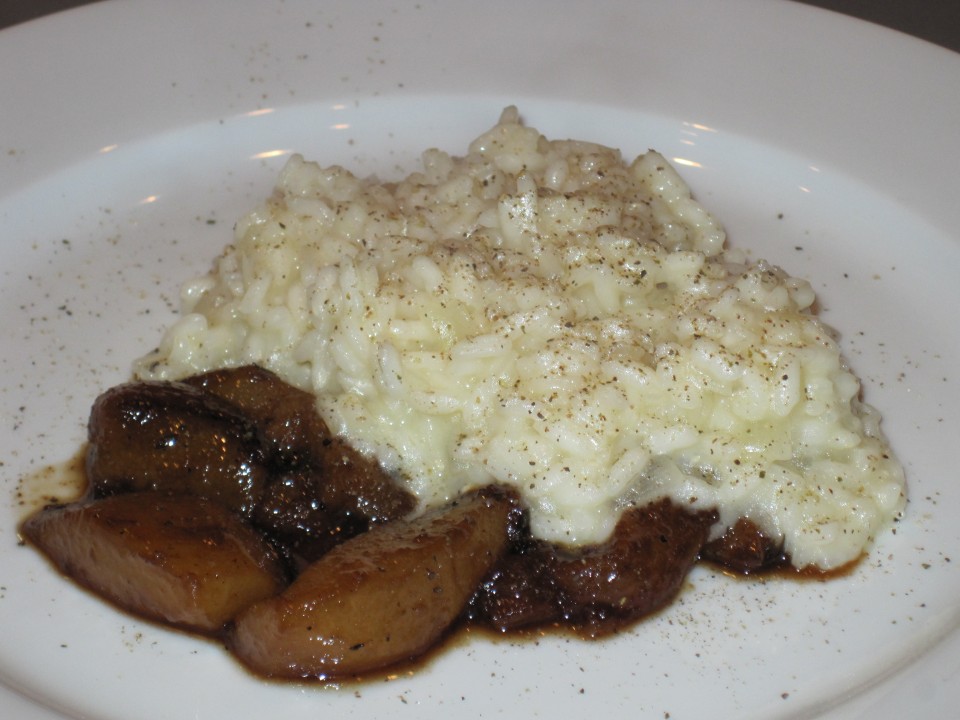 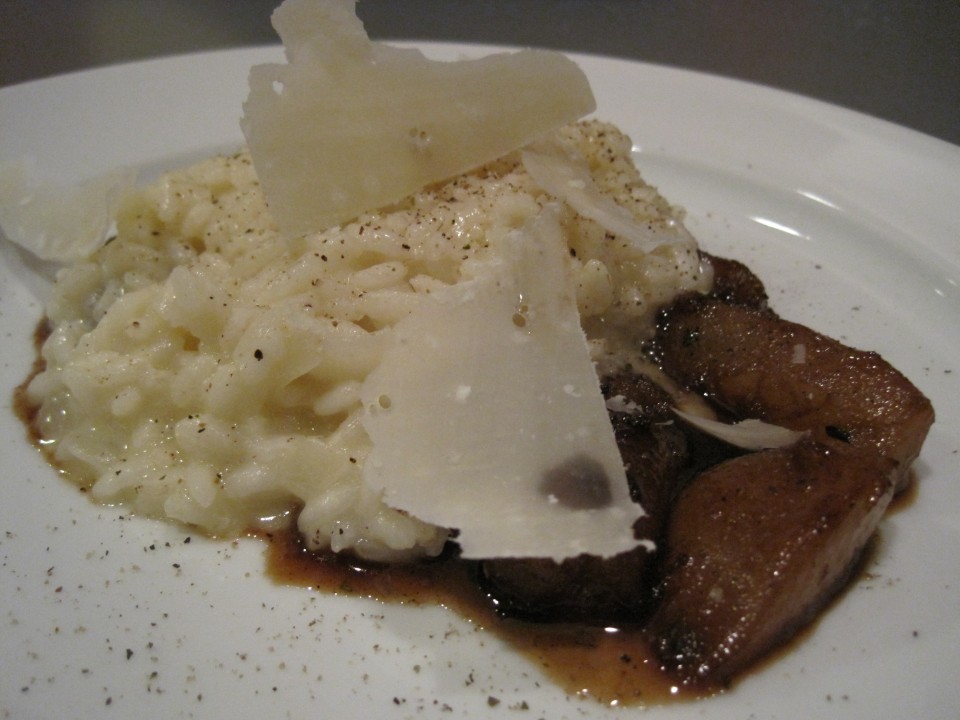 4 thoughts on “Reaching the Intersection of Rice and Pears”