The Story of Cake in a Mug in a Microwave

“Can you guys tell I am way out of my comfort zone on this one?”

That was my question to Joe, the producer of the Eagle Tribune cooking videos, and Lou, the cameraman, yesterday morning right before we started to tape.  The subject of the video was chocolate cake for one.  Mixed together in one mug.  Then baked in the same mug.  In the microwave.  Hence, cake in a mug in a microwave.

A couple of weeks ago, Joe called to chat about making some more videos.  I’m up for it, I said.

Good, Joe said, because I have an idea.

He proceeded to tell me about a YouTube video made in Britain that had gone sort of viral.  “They make a chocolate cake in a mug and cook it in the microwave.  It got me curious to know if it really works.  What do you think about making that?”

“For a video?” I asked, just to make sure I understood him.  “What if the cake is no good?”

“Then you talk about that on camera.  And if the cake isn’t any good, maybe you could come up with a better version and make that after.  Tell the viewers ‘here’s the original, and here’s one that I think is better.'”

We tossed the idea back and forth a bit more, and before hanging up I agreed I’d go right to YouTube and give the original a watch.  Which I did, immediately.  I have to say, it’s a good show.  Two bright-eyed and enthusiastic young British kids talking at a fast clip in melodious British accents about how quick and easy it is to satisfy a chocolate cake craving at any time of the day with this made-in-minutes chocolate cake served piping hot, straight from the microwave?  How could it lose?  The British accent alone makes everything sound more enticing, never mind the promise of Hot Cake!

But from a baking standpoint (which is how I tried to watch the video the second time around after I wiped the goofy, charmed smile from my face) I had reservations.  There was the length and intensity of the mixing of the batter in the tightly contained space of a mug.  Then there was the unreliability of the microwave cooking method itself.  Still, I could see why Joe was curious, because I was suddenly pretty curious myself.  What would a cake made in a matter of minutes in a microwave taste like?  I gathered the ingredients from my cupboards, set to work, and soon had my answer.

Later that afternoon, I also had a second version, a better version I thought, one using far fewer ingredients and an extra bowl for mixing, but still assembled and microwaved in short order.

I arrived ready to tape both versions yesterday.  But once Joe and Lou and the cameras were ready to film, I started stalling.  Joe began talking set up for the intro and I asked him for more detail.  I said I didn’t think one of his ideas would work.  I proposed other ideas.  By the time I found myself asking how he planned to shoot the microwave shots, I realized I was purposely stalling.  And I realized why.

“Can you guys tell I am way out of my comfort zone on this one?” I asked, meaning: I’m comfortable baking with care using a real oven; I’m comfortable when what I bake turns out puffed and browned and smelling fantastic.  I had no idea what would happen here on film with two cakes in mugs in the microwave.  I was a bit of a nervous wreck.

“Just have fun with it,” Joe said, and on went the cameras.

And you know what?  Once I focused on his message, I remembered the curiosity that had set us on this course, remembered that what we discovered about making cakes in mugs in the microwave might actually be helpful to someone thinking about making cake this way (and if not helpful, perhaps entertaining), and I did have fun.  You’ll get to see the fun video and meet my special guest, Dave – our good sport of a blind taste tester – in a couple of weeks.

Until then, here’s the traditionally baked version of the cake I developed for the microwave taste test.  I based my “good chocolate cake in minutes” on a recipe by Nigella Lawson, a cook who really knows her way around chocolate and all things that are simple and good.

Prepared and baked traditionally, Lawson’s Choco-Hotopots take roughly 20 minutes to make, start to finish.  Unlike their perfectly tasty but denser microwave cousin cake, these puff up beautifully in the oven, come out with a shiny and crackly top, and are all warm and a nice mix of cakey and gooey inside.  Plus, your kitchen will smell fabulous, like a chocolate factory.

You can even make these in mugs.  I did.  Chocolate Cake in a Mug in the Oven.  Check it out.

Place baking sheet in an oven preheated to 400°.  Butter (or spray with non-stick spray) four 6-ounce ramekins and set aside.  For smaller portions (not a bad idea; this is a rich dessert), use eight 3- or 4-ounce ramekins.  I used a combination of espresso cups and traditional ramekins.

Over a double boiler, melt together the semisweet chocolate and the butter. Mix to blend and set aside to cool. 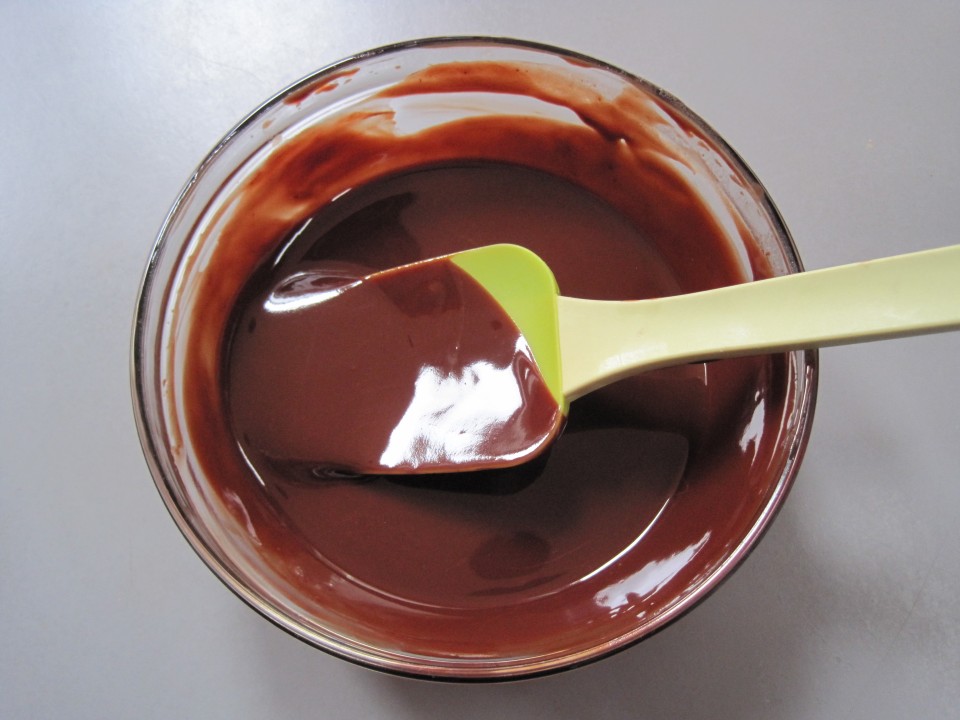 In a separate bowl, combine eggs, sugar and flour and mix to blend.

Add cooled chocolate mixture to the egg mixture, and mix until blended. 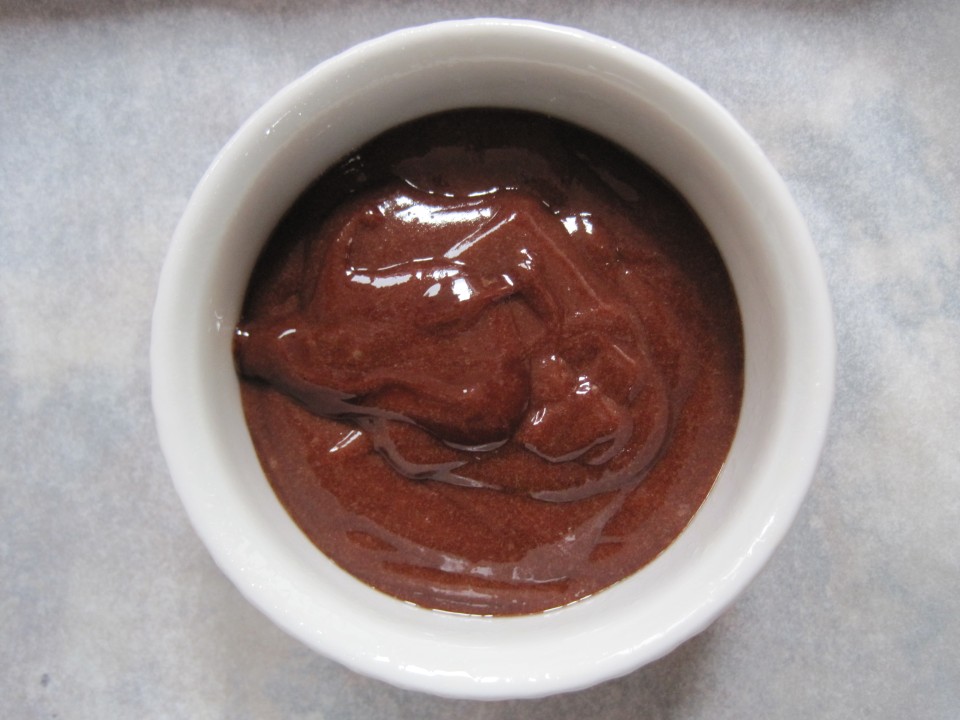 Bake until tops are shiny and cracked and chocolate beneath is hot and gooey, about 20-22 minutes for large dishes, and about 16-18 for smaller.

Remove the dishes from the baking sheet with care.  Place each ramekin on a small plate to present, and serve immediately.

A little whipped cream or a dusting of powdered sugar are both nice to pass with the dessert.

The baking dishes and the dessert itself will be extremely hot (they’re not named Hotopots for no reason!), so handle and eat carefully! 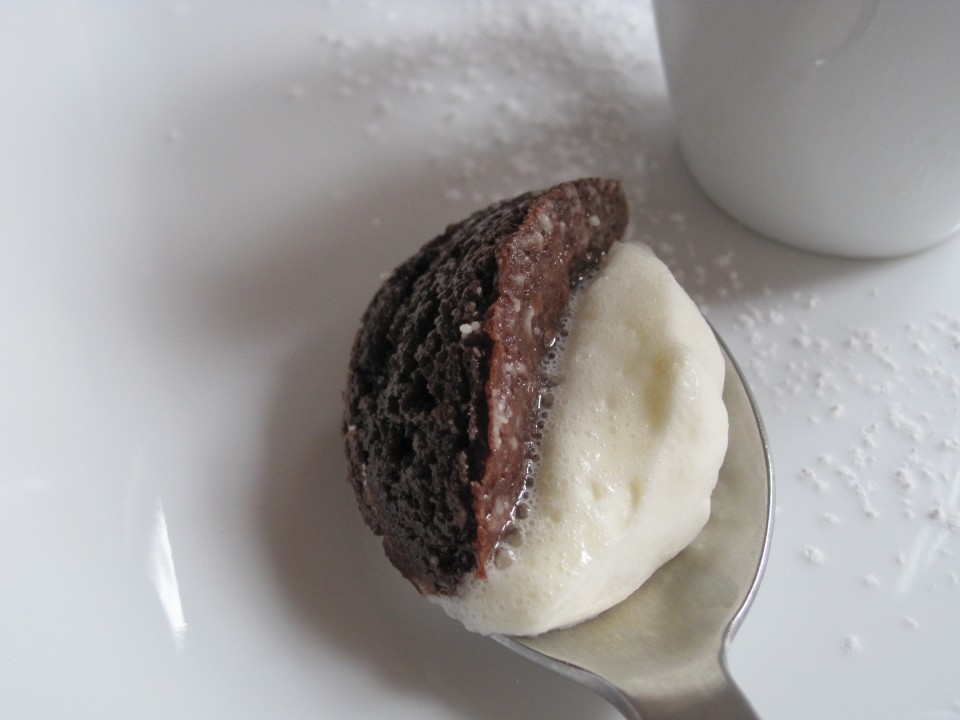 ← Gingerbread “Muffins”
Reaching the Intersection of Rice and Pears →