I bought a dozen unassembled boxes a week ago to begin the tedious but necessary task of emptying old kitchen cabinets and packing up cookware and dishes. Ben, now home after five weeks in Germany, collected the boxes for me and taped them into packable shape. Since then, little by little, all the non-essentials – the multiple pie plates, cake pans, springforms, brioche tins, steamed pudding molds, even the several baba au rhum cups I (inexplicably) own – are being stowed inside the ready cartons. I’m remembering to label the box tops so I know where to find everything on the other end of this project, important when the time comes to unpack and find the new best homes for all the wares. Eight of the twelve boxes are filled and stacked against the outer wall of the dining room. There’s enough room now for a generous path between dining room and kitchen, but that’s soon to get tighter. The kitchen table is bound for this last sliver of dining room.

And more boxes are on their way. I’m expecting boxes full of backsplash tile and a pot rack and new window blinds. Not to mention the cabinetry. I got the call on Friday that the cabinets have arrived in the warehouse, ready for home delivery. Those boxes will be here on Thursday. This weekend, in the moments when I wasn’t packing, I was rearranging furniture to clear floor space in the living room. The builder would like the cabinets stored upstairs, close to their eventual destination, rather than in the dampish basement. Me too. After all this waiting, warped wood is the last thing I want or need. Couch and chairs and coffee table now line the room’s perimeter. The center of the room is box-ready. I hope it’s enough space because it is all I have. I asked the woman who helped me schedule the delivery if she could estimate how much room the boxes of cabinets would take up. She told me she only knew the cubic footage, the amount of space all the boxes together would occupy in her delivery truck.

But, she added, the boxes can be stacked, if that’s any help.

With ten-foot ceilings and plenty of room to go upward, yes, that’s helpful.

I had only barely finished lunch today when Home Depot called to tell me the kitchen hardware – all those little things you don’t think about ordering until you have to think of ordering them, namely thirty-six drawer pulls in an assortment of sizes – had arrived and was ready for pick up. Yay, I thought, another box. But a small one, anyway. There is that.

I’ll be right over! I told the woman on the phone.

Fifteen minutes later, I loaded that one small box and two larger boxes (each holding one five-foot floating shelf) into the car. Oh, the wall shelving arrived along with the hardware; didn’t they mention that on the phone?

No. They did not. Those last two have been tucked into the book alcove in the den, propped up by the dogs’ crates. 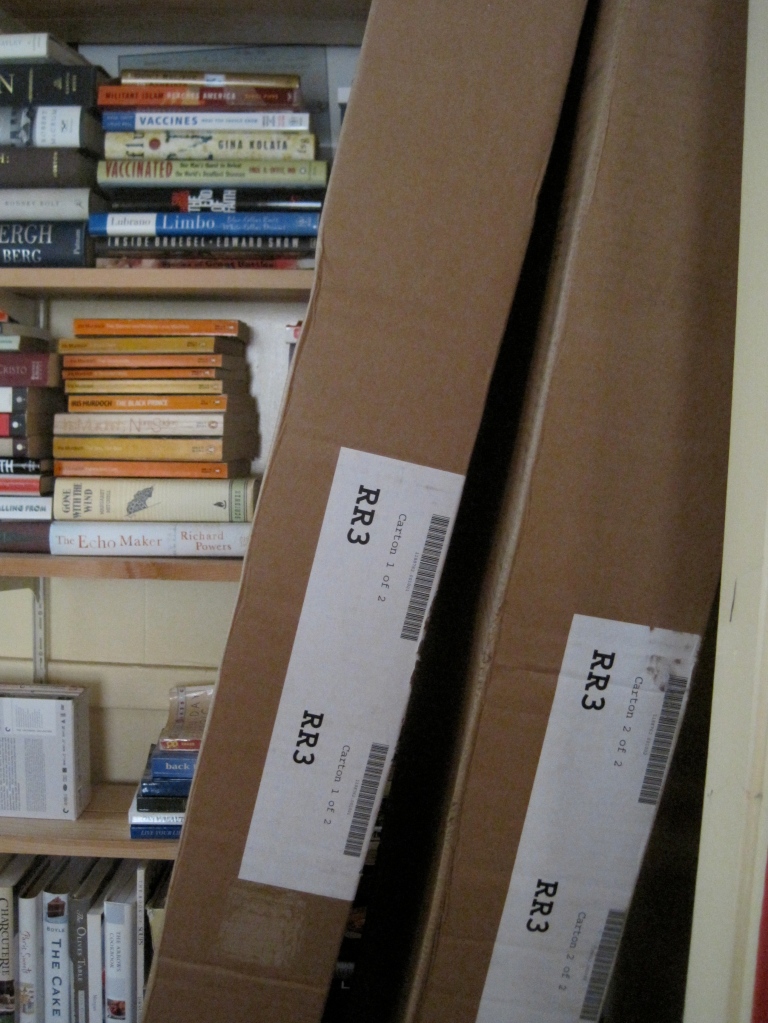 My house is officially overrun with boxes.

The last four empty cartons await the cooking essentials left in the kitchen.

Dishes, glasses, the flatware. The toaster, the coffee maker. A couple of pans, a couple of pots, a couple of mixing bowls that do double duty for now as salad or serving bowls. A colander, a big spoon, a pair of tongs. Until the builder gives the green light to the demolition, the kitchen continues to function, albeit in pared down fashion. A simple complement of tools for simple cooking, and simple is fine amidst all this box-filled chaos.

Simple can also be delicious.

Last Tuesday, Richard of Middle Earth Farm sold me a dozen squash flowers when I picked up my share for the week. I had noticed the smattering of orange in the squash patch as I drove into the farm the week before, and asked if he ever made the edible (and delicious) blossoms available for CSA customers. I love them, battered and fried simply, but hadn’t had them prepared that way since I was a young girl. My father used to grow zucchini and would occasionally pick the flowers and fry them up the same night. The best part was eating them, hot and still crisp, right from the paper towel they were being drained on.

Richard assured me he would have a dozen ready, and he was true to his word. There they were, at the stand, two bouquets of six flowers. They had been picked early, when they were open, but had since closed. Open would have been the ideal had I planned to stuff the blossoms, like so many people do. But I had no plans to stuff these yolk-colored beauties, as Richard knew from our conversation the week before.

Many home cooks and restaurant chefs do stuff them before frying, with some kind of light, creamy cheese filling. Goat cheese, ricotta, cream cheese, a few herbs. And all these make for a lovely finished dish.

But I prefer them plain. They I prefer to appreciate the creaminess of the cooked blossom itself and feel that its texture needs no additional help from a soft cheese. Nor does its natural delicate sweetness. The thin outer shell of batter and a little salt make for the best adornments, I think, resulting in one of my very favorite things to eat.

Why, I wondered, as I stood over the paper towel and reached for a fried squash blossom, had I waited so long?

To prepare the flowers for cooking, rinse them inside and out, gently but thoroughly. Pat dry. (I stood mine upside down on a rack set over the sink to drain and dry.)

Using a small sharp knife, gently cut around the stem in a circle to loosen the flower’s pistil. The stem and pistil will come out easily in one piece. Discard.

Place the flour and pinch of salt together in a medium mixing bowl and add seltzer (or beer) a little at a time, stirring as you add. Add only enough water to make the mixture as thick as heavy cream. Once you have reached that consistency. Add the egg to the mixture and whisk to combine.

Heat about ½-inch vegetable oil in a large heavy skillet. Working with only three or four flowers at a time, gently dip these into the batter to lightly coat. Shake off any excess batter and lay the blossoms in the hot oil to cook until golden brown on the first side. Turn and cook to golden on the second side. When done, remove the blossoms to a thickness of paper towel to drain. Repeat with the remaining flowers, working in batches. 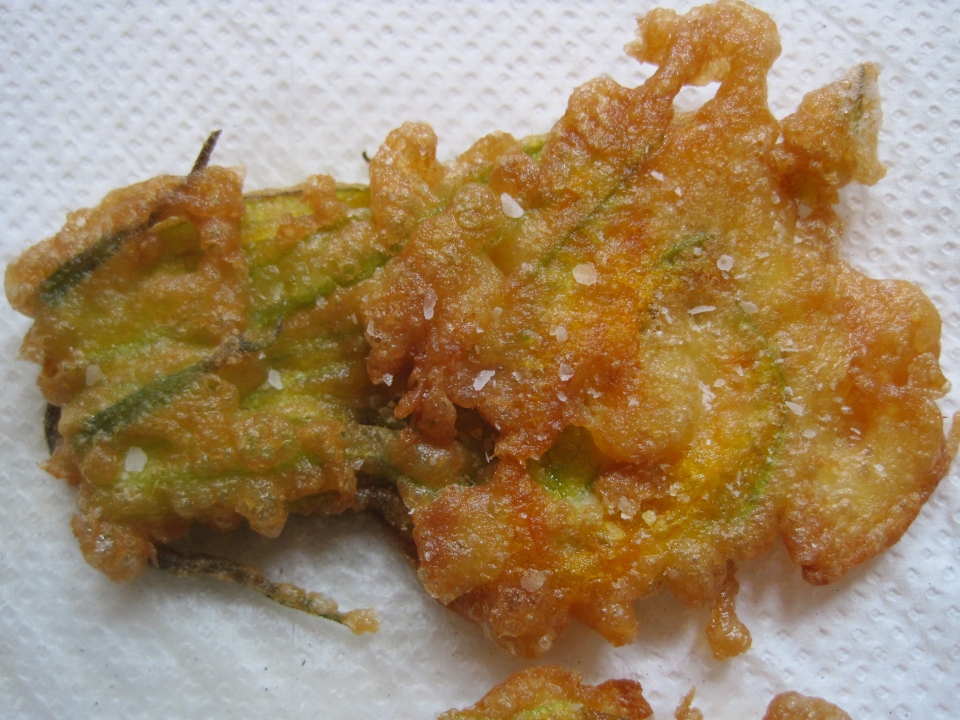