Toasting Grits and Other Kitchen Escapes

When life gets busy and I want to escape from the tasks at hand, my mind gives me a little assist and starts wondering about such things as, has anyone ever toasted grits before simmering them into their  best-known porridgey, stodgily delicious form?

Thinking about grits, you ask? Let me explain. I was at the end of a book project; I was transitioning between revising and printing the last pages and turning my thoughts to finding a home for it with an agent, an editor maybe. At the same time, my son was rushing around to pack up for college and I was rushing around with him. Last minute we had to track down a room fan and a shower caddy and the toothpaste we had forgotten to put on an earlier list. There was also the matter of having to say goodbye again, the subtext to all the rushing, the reality one forgets when rushing. And yet goodbye loomed, pushed aside but never forgotten, not really.

Truth? I didn’t want to say goodbye again. I had gotten used to having him home, despite the unexplained dent in the front of the car, despite the log splitting plan he and his friend hatched that left me with a back yard full of logs, despite all the dishes I found myself cleaning after one of his stints in the kitchen. I wanted him to stay, not go, and in the face of this long, hard goodbye a little escape was in order. And corn was on my mind anyway, the roasting of the corn’s kernels like I showed you how to do a couple of weeks ago, how that process brought to something straightforwardly sweet a caramelized depth of flavor.

Follow the trail of my thoughts from there: The pan roasted corn started me thinking of all the other grains I pan roast to a golden brown, the bulgur wheat and the pasta-like granules of couscous, and the complexity this browning brings to a final dish. These musings about toasted grains led me to consider grits, also known as hominy, which is really just corn – maize – that has been  treated with alkali. Grits, all white and creamy and bland, a  puddle of comforting sameness. Could this grits sameness be jolted into something different, something richer maybe, if browned? Could it be done? Had it been done?

I did a cursory online search and also asked around my food friends. What did I learn? No friend who answered had ever toasted grits before cooking them, and no source on the web provided a recipe that sprang from toasted grits. I had to try it. Guess what? Toasting works well. The grits are still creamy and wonderful. But they also are creamy and wonderful with nutty undertones. I had a cup of corn kernels in the freezer, left over from the last ears of corn, and we pan roasted these with a minced padrone pepper, and stirred them into the grits at the end of the cooking process. The smokiness added to the layers of flavor and elevated the finished shrimp and grits into something really special.

Try these grits for dinner mixed with cheese and served with shrimp, a ragout of silky peppers mixed with tomato, onion and garlic on the side.

Place a clean large skillet over medium high heat to warm the bottom of the pan. Add the stone ground grits to the pan and stir. While stirring occasionally, allow the grains to toast to a light brown. When toasted, remove the grits from the pan to a plate or board and let cool.

Heat the oil in the same skillet. Add the corn to the pan and roast to a golden brown over medium heat, stirring occasionally. When the corn is evenly golden, stir in the chopped chili. Stir and remove from heat. Set pan with corn aside.

In a large saucepan, combine the broth, salt and butter. Cover and bring to a boil.

When boiling, gradually stir in the grits in a slow stream. Let the mixture return to a boil. Once it does, turn the heat down to the lowest heat possible and cover the pan. Cook for 20 minutes, stirring occasionally. Add the additional broth and stir for 10 minutes more, until all the liquid has been absorbed.

After the last 10 minutes, remove the saucepan from the heat and stir in the cheese. Stir until cheese melts and becomes creamy. Add the pan roasted corn, stir. Serve immediately. 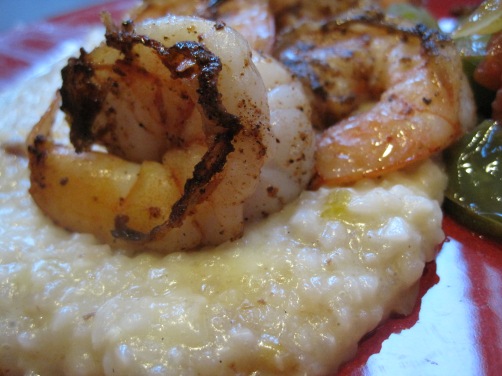 I learned it’s impossible to escape the inevitable, but in the meantime, while trying, a lot of kitchen chores got done. My impulse toward ignoring the impending move helped me work through a large share of produce this week. Notable in this week’s CSA share were the first sweet potatoes, three pounds of dusky dark purple European style plums, and a huge watermelon. The dog and I are working our way through ice cold cubes of the melon (she loves this fruit better than any other human food treat) at breakfast and lunch.

I hope to bake a plum tart and also some jam when I have time, and I will now that the house is quieter. Until then, I halved and stoned the plums, froze the halves, and put them in freezer bags to keep until I have cleared my decks for baking and jam making.

Since I’m not fond of eating sweet potato baked or as a straight up mash, I decided I would turn the mashed potato flesh into bread or rolls. Time, though, remained an issue for that project as well, so I thought I would mash the cooked potatoes and freeze the puree for baking later. A little research into back issues of Bon Appetit yielded the perfect way to cook the potatoes quickly for this bright orange mash.

This cooking method is super easy, whether you want the puree for rolls or for a dinner side dish the same day.

Pierce up to 2 pounds of red-skinned sweet potatoes all over with the tip of a sharp knife. Place these in the microwave. Cook at full power for 7 minutes.

Open the microwave and turn the potatoes over. Cook on the second side for an additional 7 minutes. After this, they will be done, but pierce with a fork to be certain.

Remove and peel the skin right off, saving the potato flesh in a large mixing bowl and discarding the peels. 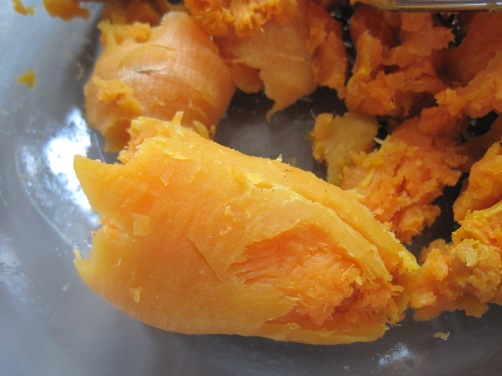 With a potato masher, crush the flesh until creamy and smooth. At this point, either add butter and seasonings for a simple mashed sweet potato side dish or use in a favorite dish of your own. 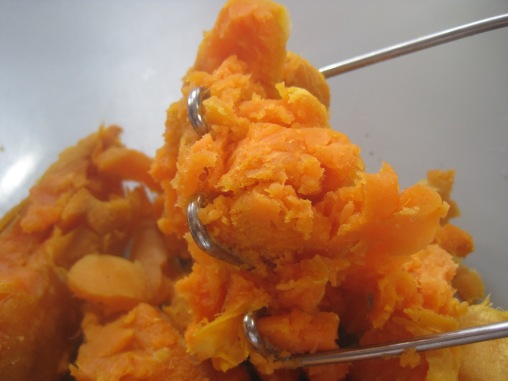 Or, measure and divide the mash between freezer containers, mark these with the date and contents,  and freeze for use in baking at a later date.

2 thoughts on “Toasting Grits and Other Kitchen Escapes”