My brother-in-law joined us for dinner last night: grilled sirloin steak tips with mojo (a warm citrus and garlic based vinaigrette), black beans with cilantro, stewed beet greens, a sliced tomato salad with pickled beets and beans, and fresh corn. The beef from Tendercrop Farm, the orange-lime mojo, the corn, the salad, even the beet greens won raves from Larry. As I told him over that fresh, delicious meal a little bit about the CSA concept and about our produce CSA share at Middle Earth Farm specifically, I also pointed out that every aromatic, every seasoning, every vegetable had come from the little farm up the road.

As we close in on Labor Day, back to school, and the first day of fall, I feel it is a good time to take stock of the CSA season. Last night was no exception, no aberration of a meal time. I am getting enough food from Middle Earth to last from Tuesday to Tuesday and then some. I haven’t supplemented the week’s share with anything but extra fruit from other local farm stands. Middle Earth garlic was sliced into olive oil base for both the mojo and the stewed greens. Middle Earth cilantro rounded out seasoning of the black beans. And so what if the recipe for those black beans called for a chopped onion and I didn’t have one. Instead, I had Farmer Richard’s shallots on hand, so I made the dish with chopped shallots. In practical terms, this means trips to the grocery store are fewer and the receipts are much, much smaller.

But I also find myself embracing substitution as a fun challenge, not second best or making do. I let myself become a more flexible cook. More than that, making substitutions reminds me that recipes (and the food we prepare from them) are living and responsive and flexible also, that preparations change with the cook and from generation to generation as a natural matter of course.

Between the preparation and the putting up in one way or another, cooking and eating fresh takes time. I’m lucky to work at home for the most part, so the time I spend on these projects is both a welcome diversion and a possibility. Still, a lot of the work – the pickling, the bubbling pots of jam and water baths, the making and freezing of pestos among other things – takes place on the weekend. During the week, I allow not much more than an hour or hour and a half on a  each night for pulling supper together, although, admittedly, by the end of the day that’s an hour or so I would rather spend cooking than doing anything else.

A primary goal for all this wonderful CSA produce was to eliminate waste, remember? Well, I have been vigilant. Thus far, with the exception of a few errant leaves of basil gone all spotty and black, I have wasted nothing. What we haven’t eaten has been either frozen or preserved as jam or, in a new direction this week, pickled. 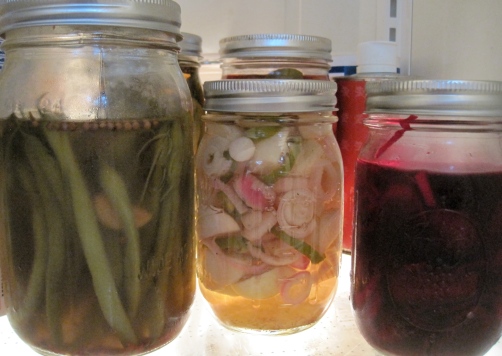 This week I pickled beets. 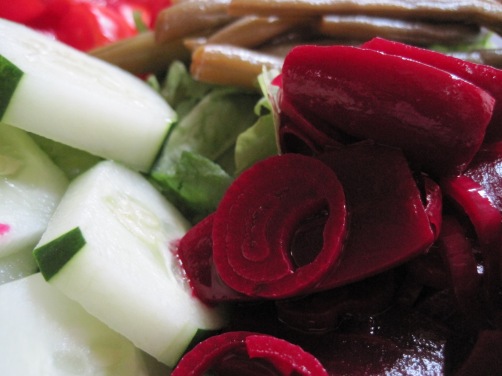 Fresh corn in a salt brine (corned corn if you will, and a definite misstep. You can read my comments in this Epicurious forum). 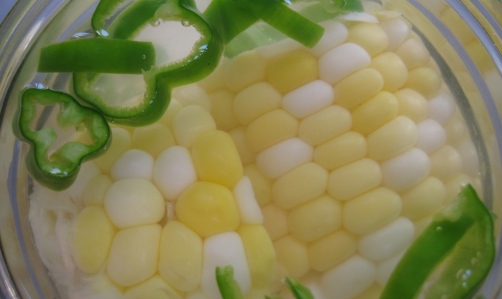 And green beans. We have picked up beans from the farm for the past three or four weeks, and for the first two of those I steamed them and served them with a drizzle of olive oil. Simple stuff. My daughter is wild about steamed green beans. I can eat them. My husband thinks they taste like dirt.

“What if I pickled them?” I asked, and he agreed that might make them a little more palatable.

This is a quick or refrigerator pickle, meaning I pour a hot brine over the par-cooked vegetable that has been packed into a jar, I screw a lid on, and let the brine cool at room temperature before refrigerating. No water bath processing. Of course you must eat these kinds of pickles within two or three weeks, but that’s the easy part. We have been enjoying these on composed salads all week. Drained from their brine and laid over a peppery green like arugula, the finished beans are puckery tart but with hints of the exotic from coriander seed and bay.

The recipe for the brine is cobbled together from several pickling recipes found in the Fannie Farmer Cookbook, based on what I had at hand. Experiment with your favorite spices and let me know how your pickles turn out. 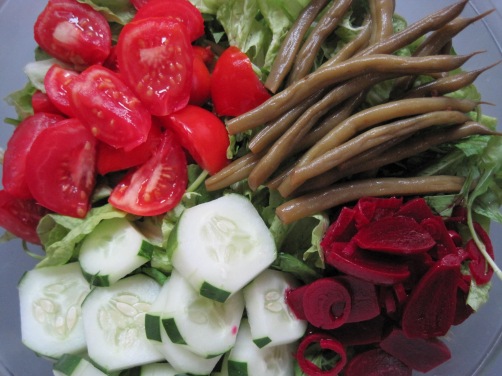 Wash a 1-quart glass canning jar, its lid and its ring. Let dry.

Steam the trimmed green beans in a steamer basket over salted boiling water until just starting to soften but still bright green. The tip of a sharp knife should pierce the bean with some resistance, or they should taste crisp-tender to the bite. Remove the beans to a colander and drain. Cool until they are able to be handled.

Once the beans are cool enough to handle, pack them into the canning jar so they stand upright, cut end down and tail end at the top of the jar. Add to the beans in the jar the garlic, coriander, red pepper flakes, peppercorns, and bay leaf. Set aside. 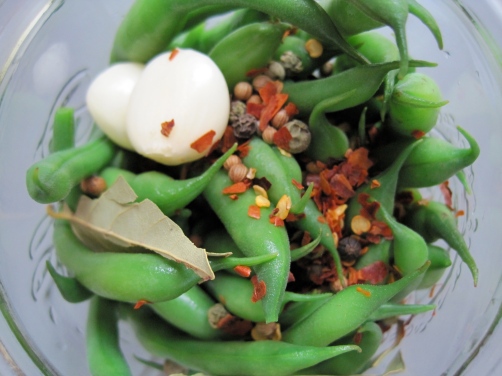 Place the vinegar, water, sugar, and salt together in a medium saucepan. Bring to a boil over high heat, and boil everything together just until the sugar and salt dissolve, about a minute. Pour as much of the the pickling liquid as possible over the beans and seasonings in the jar, covering all the beans but leaving somewhere between 1/2- and 1/4-inch of head space at the top of the jar. Cover with the lid and screw on the ring. Let the beans and brine in the jar cool to room temperature, and then place the jar in the refrigerator.

Consume within two to three weeks. 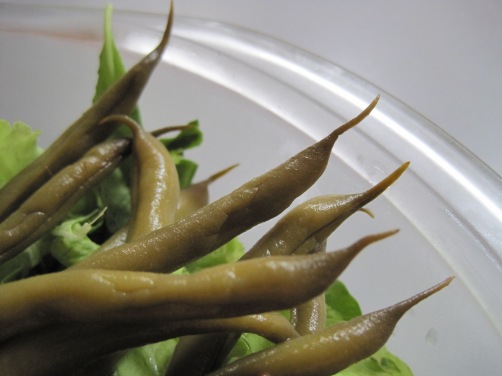