Cooking from the Farms: A Little or A Lot 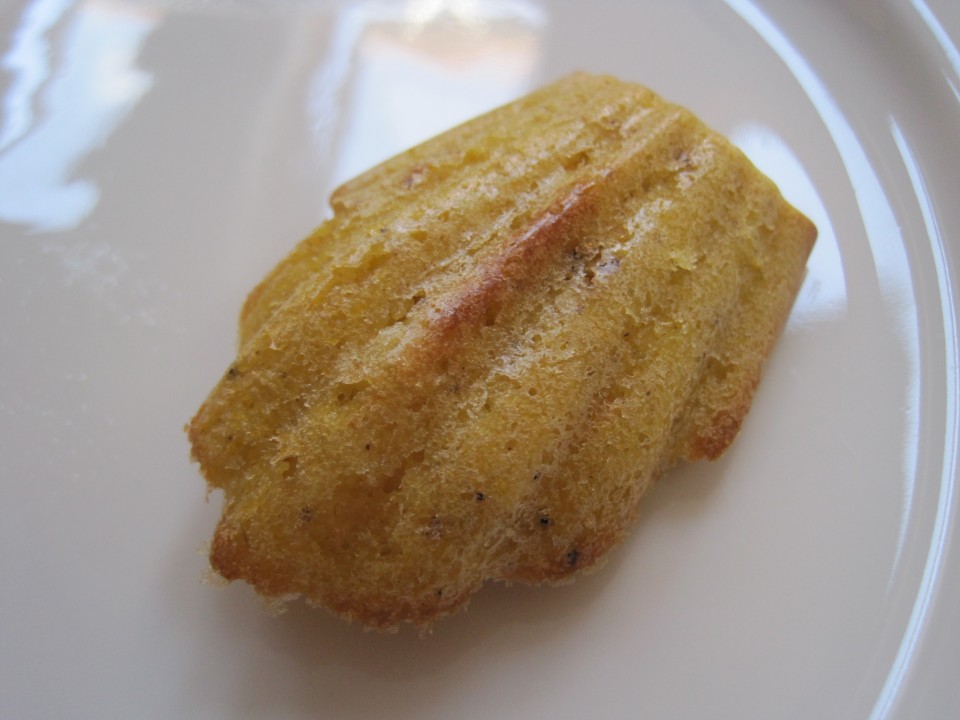 Taking stock after my Tuesday and Wednesday CSA pickups I often find I have one leek and about a million cherry tomatoes.  Or one small kohlrabi and five zucchini.  Or two peaches and three ears of corn to divide between four people.  The next week, make that eight peaches and nine ears of corn.

Even when I bring home the ideal amount of an item, say a nice full stalk of celery, over the course of a week I’ll often use everything but the last rib or two in a salad.  Unless I’ve got a big pot of vegetable laden soup on the menu, a leftover rib or two of celery means I find myself standing at the counter with the salt shaker in one hand, munching my way through them just to use them up.

Yes, celery is good for me, but I’m trying to be a little more creative and more fair in my distribution of the goods.  So this week I made a conscious effort to think of ways to use up both the odds and ends and the overstock.  Take a look.

A Profusion of Peppers

Chili peppers, that is.  Technically not from either CSA farm, but we do own them; they are growing in glorious abundance on our deck.  We have long, slender cayenne peppers 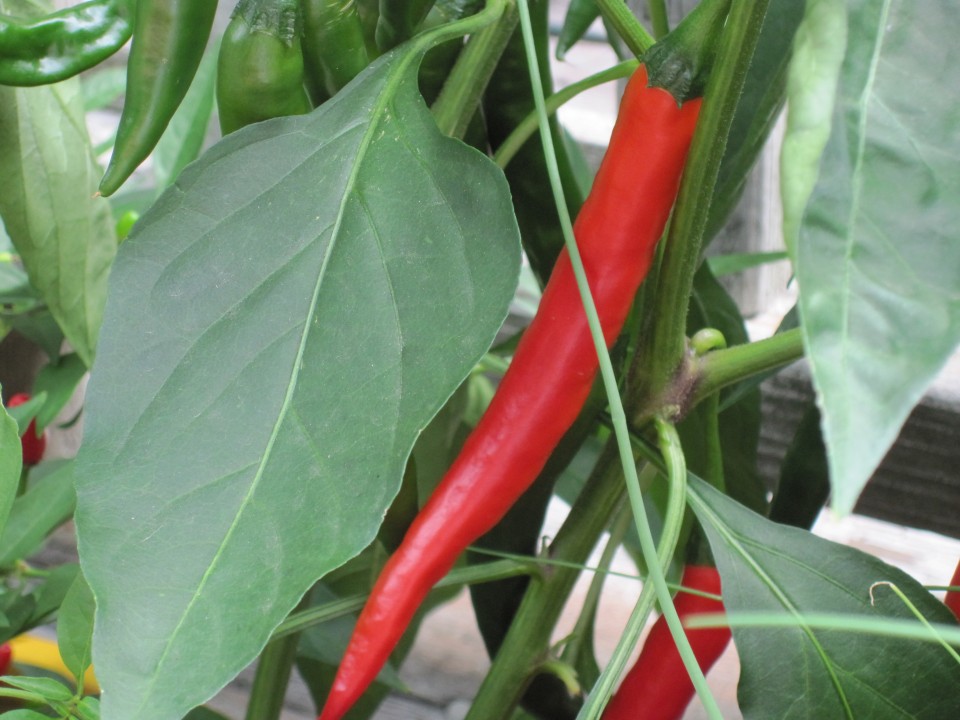 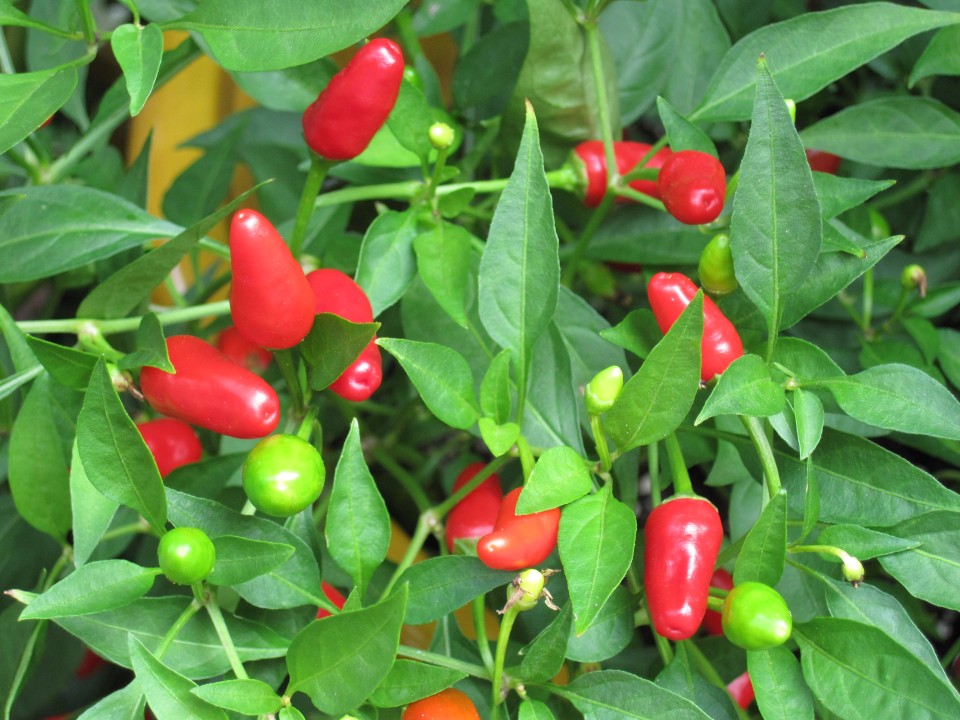 We use as many as possible in fruit, tomato, and corn salsas.  They make appearances in stir fries and anywhere else a little heat is called for.  But no matter how many we pick, they never seem to dwindle in number.

But starting a bottle of home peppered vodka last weekend has used up plenty.  We’re letting the peppers steep in the vodka for a week and may give it a taste test in spicy Bloody Marys (very spicy, such as the ones made at Macondo on E. Houston on the lower east side of Manhattan) this weekend. 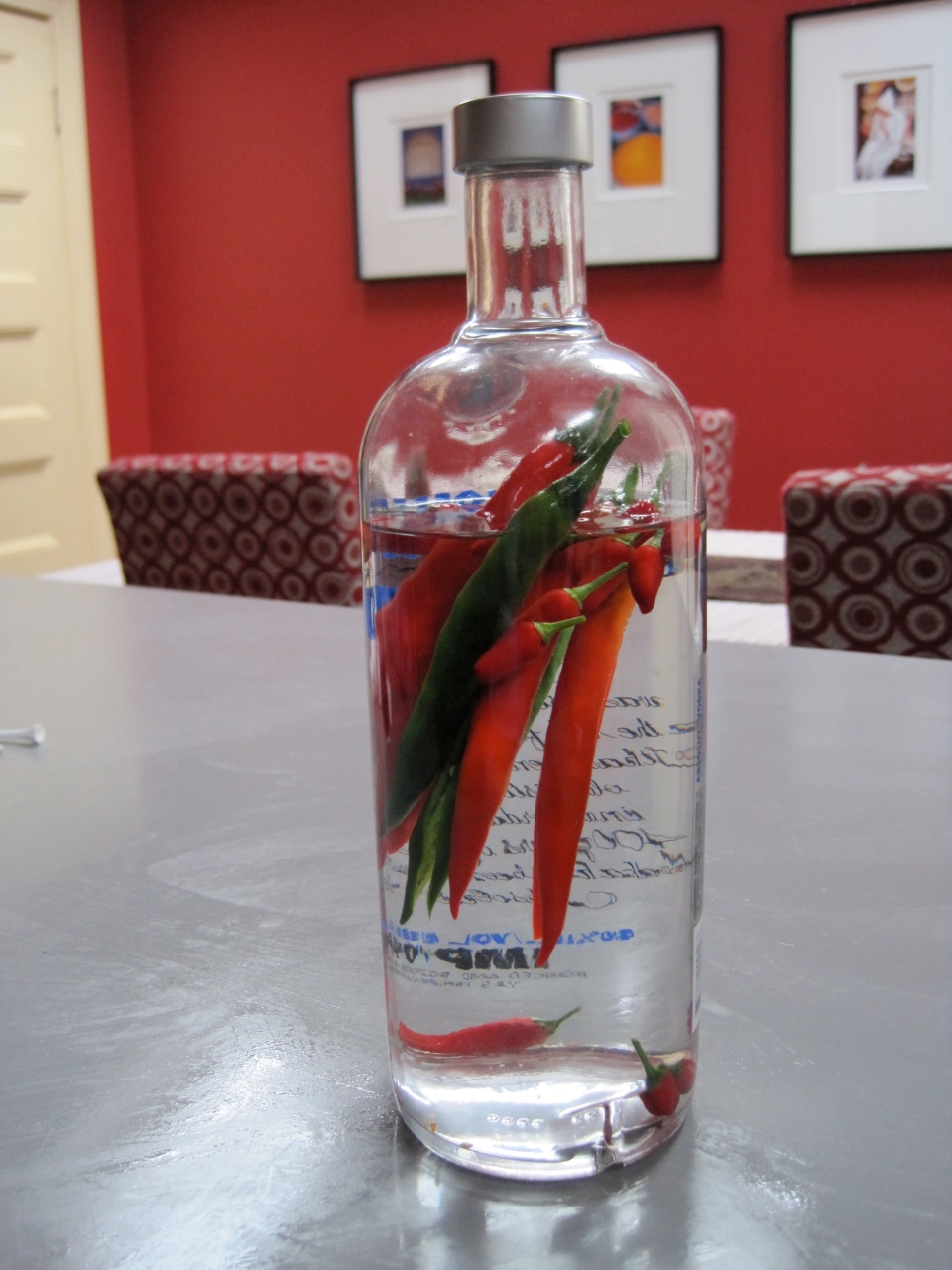 I love leeks, love their silken texture when braised and the layer of sweetness they add to any dish when they stand in place of the common onion.  My favorite way of cooking them is simple, in a saute with chopped fresh tomatoes and loads of black pepper and a finish of salt.  That dish may require only two main ingredients, but it uses a lot of each one.  Loads of leeks and tomatoes cook down to produce a wonderful thick stew of a side dish.  One leek wouldn’t begin to do the job.

But one leek is what I had. 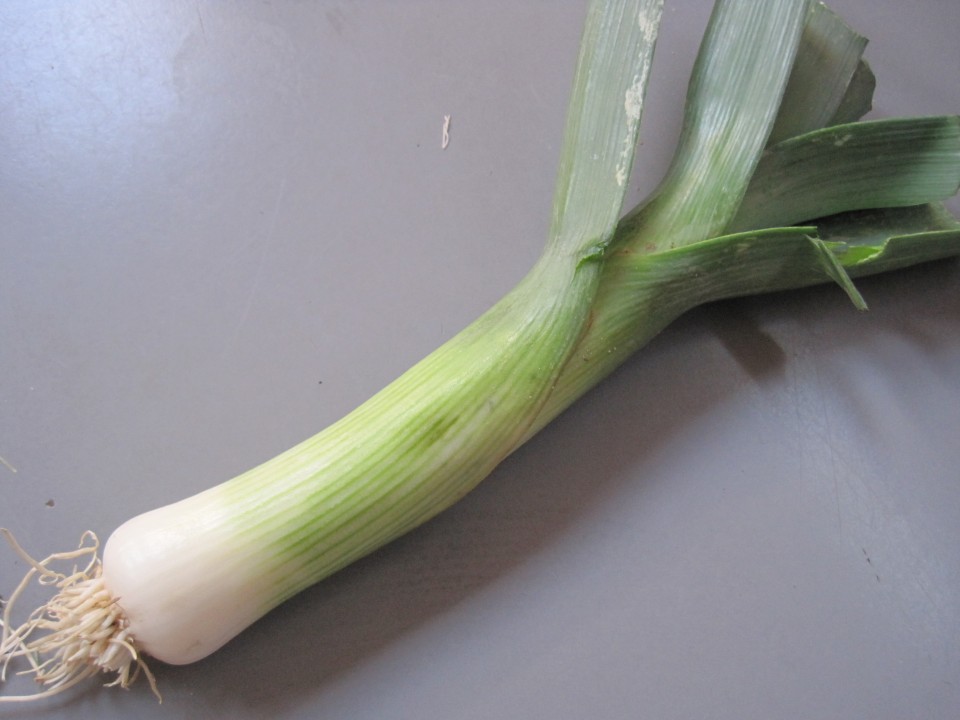 I also had a few summer squash, so I sauteed the white part of the leek with slices of the squash until soft and slightly golden.  While the squash cooked, I cut the tender green upper part of the leek into thin matchstick strips and submerged a few at a time in hot oil to make what I call frizzled leeks. 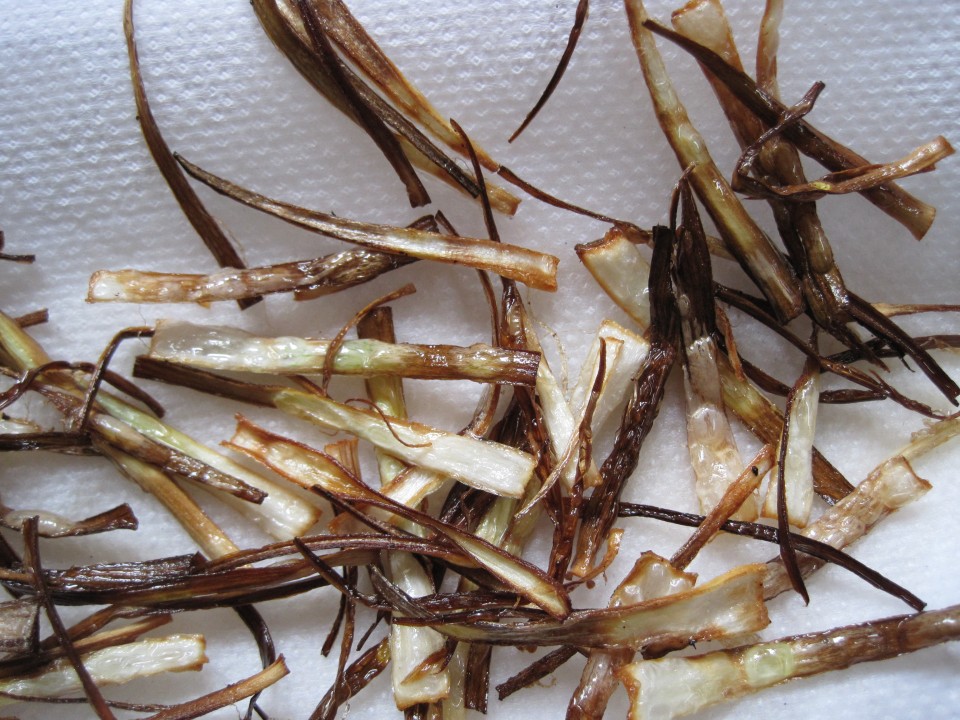 Frizzled leeks? you ask. Think of that green bean casserole that makes the rounds over the holidays, conjure up those canned crunchy onion things that get sprinkled over the top.  Now forget them.  Frizzled leeks are much, much better – crispy, crunchy, not at all greasy or heavy.  And best of all, they are real and unprocessed food!  You can fry up a batch in less than two minutes for sprinkling over any vegetable dish or even a steak hot off the grill.  Heaven. 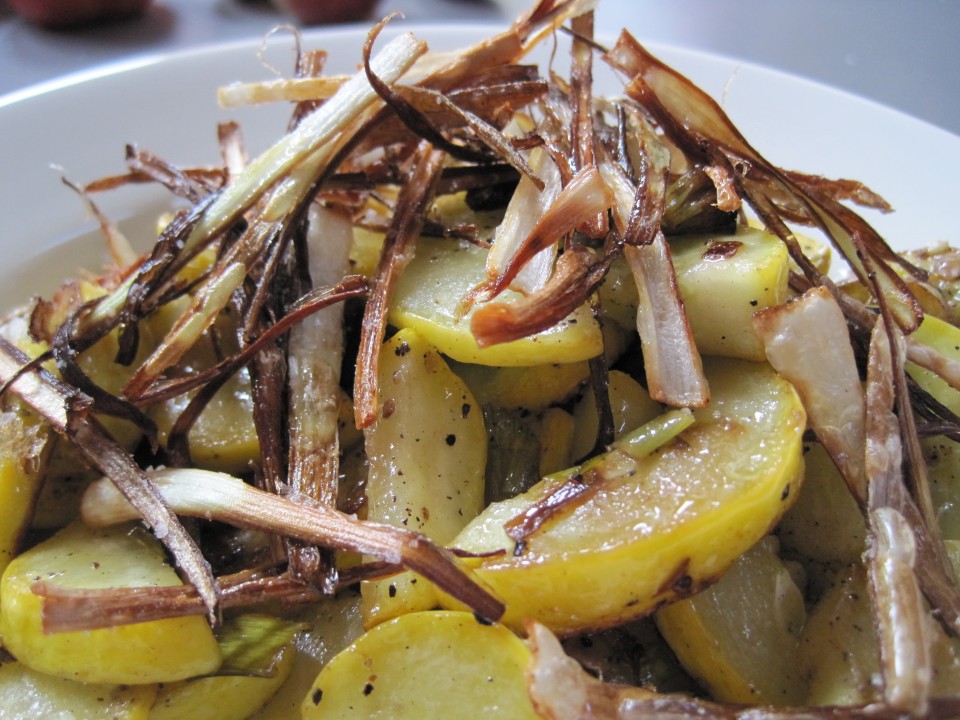 The Hard Core Odds and Ends

One rib of celery – or one apple, one small kohlrabi, a radish; anything crisp and crunchy will do – can be sliced up and tossed together with toasted walnuts and crumbles of a creamy and salty blue cheese like Great Hill Blue from Marion, Massachusetts for a great crostini topping. 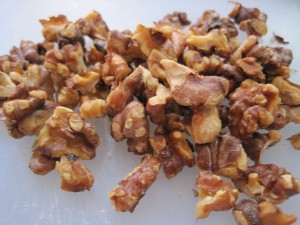 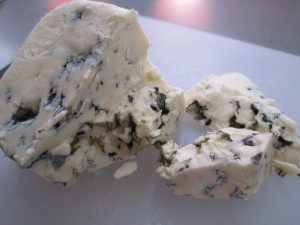 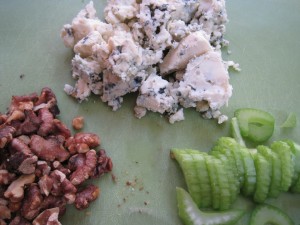 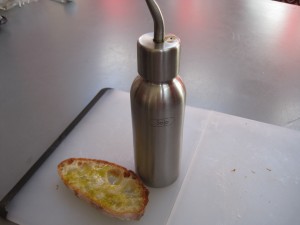 These crostini make a simple accompaniment to a salad or any kind of pureed vegetable soup, but are lovely enough to serve on their own as a cocktail hors d’oeuvres.  I used celery, but the idea of a tart apple together with blue cheese is making my mouth water. 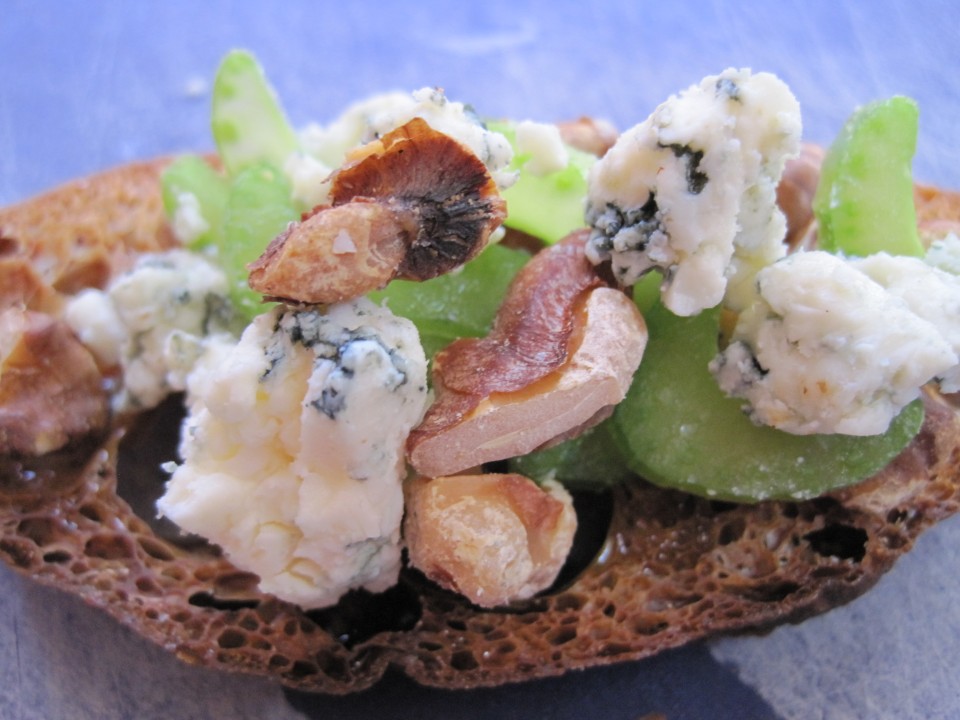 Leftover cherry tomatoes may be mixed together with some chopped kalamata olives as a topping for another tasty but unfussy hors d’oeuvres: a frico, or baked parmesan cheese crisp.  Frico are made by combining a cup of shredded parmesan cheese with a tablespoon of flour and a little ground black pepper.  The cheese mixture is spooned into little mounds on a parchment lined baking sheet and baked at 400 degrees for about ten minutes or until brown. 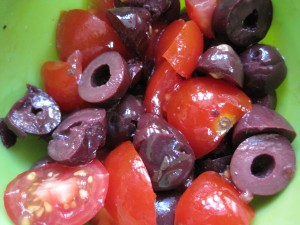 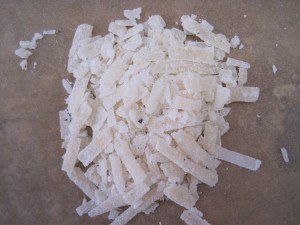 For a thin and flat crisp, let the baked frico rest on their baking sheet for a couple of minutes to set before removing them to a cooling rack.

I removed a few of mine from the baking sheet when still warm (of course your hands must be like asbestos mitts to do this) and draped them over a rolling pin to make them slightly curled, therefore holding the tomato-olive topping better. 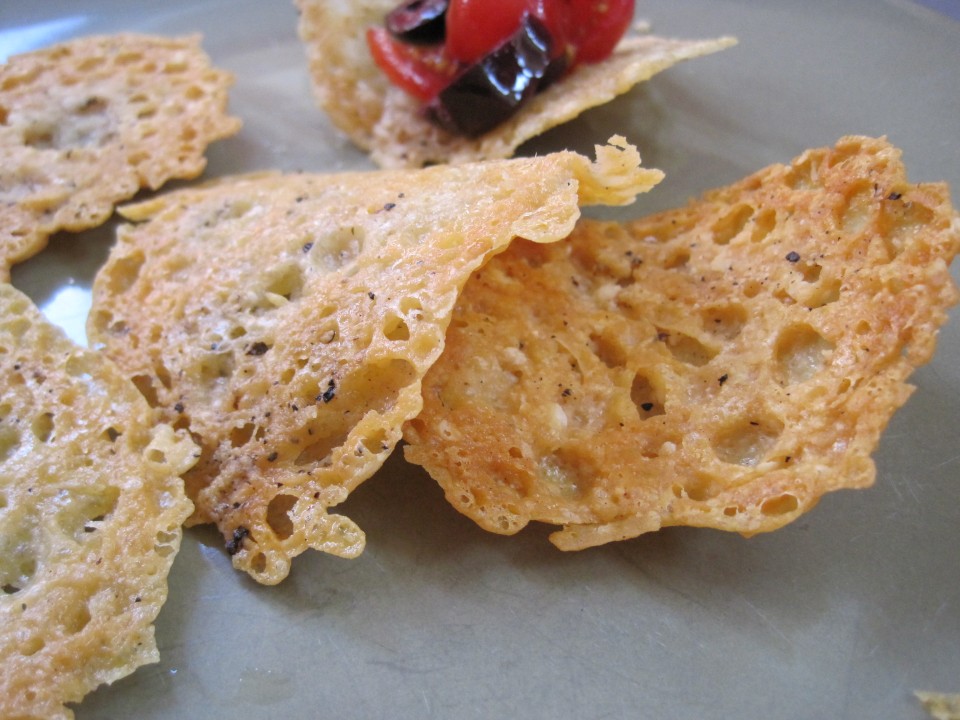 Most of the ears of corn kicking around in the fridge will be turned into corn salsa with lime and a few of the aforementioned hot peppers tonight.  Alas, I have one ear left over; the large saute pan is only so large.  I opted to turn this last ear into Fresh Corn Madeleines.  Again, like the crostini and the frico, this is one versatile little nibble.  Eat them with soup, salad, or the sour cream and caviar recommended in the recipe (from Epicurious: http://www.epicurious.com/recipes/food/views/Fresh-Corn-Madeleines-with-Sour-Cream-and-Caviar-106997).

The Epicurious recipe calls for mini Madeleine pans, but honestly, I’ve never seen such a thing.  I have one silicone Madeleine pan that makes nine standard size cakes.  I also have a couple of mini muffins tins.  By dividing the batter between both pans, I made nine of each shape. 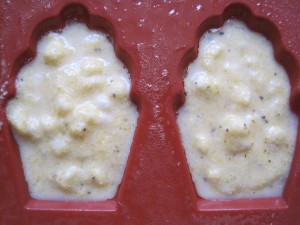 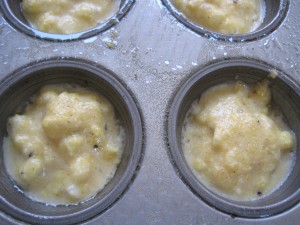 These had to bake for twice the recommended amount of time, but they came out just fine.  Delicious in fact.  The corn retained its juicy freshness that explodes in the mouth.  The salt and pepper defined them as a savory.  The only thing I might do differently in the future is add some chopped chives to the batter.

Feel ready to tackle your own bits and pieces?  It can be a delicious challenge. 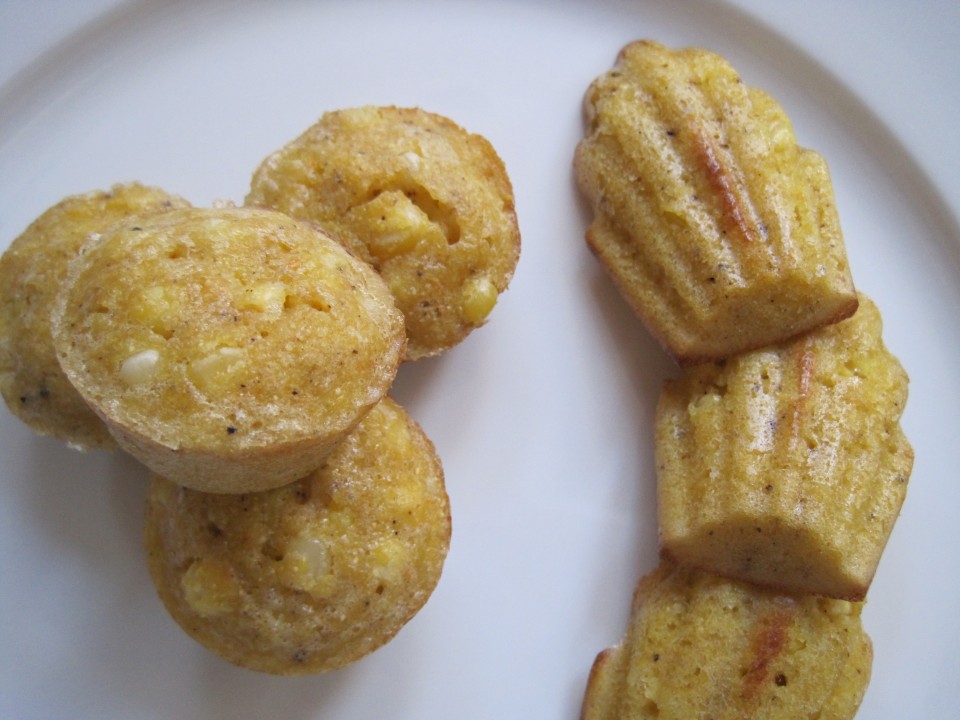 ← The Pepper Predicament
The Hardest Work →

2 thoughts on “Cooking from the Farms: A Little or A Lot”