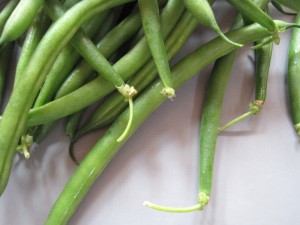 In the British television show, Ready, Steady…Cook!, two contestants were each paired with a celebrity chef to go head to head in a cooking competition that was equal parts race against time and battle of creative quick-thinking.  Unlike the Iron Chef-type cook offs where the show’s producer selects one secret ingredient to be cooked with, the rules of Ready Steady…Cook! required that contestants bring their own mystery bag of 5 or so grocery items.

Seeing the grocery bag opened and the items unpacked by a celebrity chef bound to cook from the bag was the highlight of the show.  Quite often contestants would bring things like a can of spaghetti, a 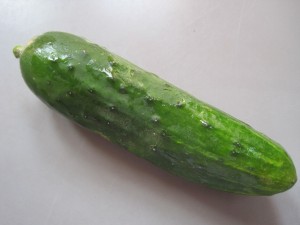 cabbage, a mackerel, Lyle’s Golden Syrup and a Mars bar.  For a win, these 5 or so disparate ingredients had to be turned into something deliciously edible, something that resembled a meal.  The chefs had a pantry of staples to work with – flour, sugar, cream, butter, olive oil and the like – but couldn’t stray far from featuring their partner’s purchased items.

Unpacking my own bag yesterday after the early morning run up to Heron Pond Farm, I felt a bit like I landed myself a spot on the show.  The hot and dry weather and some pests have played a huge role in limiting what the farm has been able to produce, but I did have some flexibility of choice between offerings.  Here’s how my choosing played out:

I said “No” to the proffered pint of blueberries.  I had a good reason for turning it down this week.  I learned that I can double my share to a quart of berries if I take a u-pick option (they give me a pint vs. I pick myself a quart).  There’s another option if I take the u-pick route, which is to do the picking at my leisure, i.e., on a day that isn’t 100 degrees.  I decided to take Heron Pond up on both.

I did bring home 1 tomato, 1 head of escarole, 2 cucumbers, and a half-pound bag of green beans.

At first glance a little spare, even a little limiting.  Throw in yesterday’s extreme heat factor and you might expect me to be writing about the joys of a big tossed salad, yes?  Well, have a little faith.  I can cook a meal out of some green beans and a cucumber…and so can you.

I had my first taste of authentic Thai food at Thai 55 in Chicago’s Hyde Park neighborhood in 1985.  Before that day, what I knew about Thai cuisine came from reading Gourmet magazine and tasting a chicken satay hors d’oeuvre that was passed at my wedding reception.  I was primed for this food, though, and at Thai 55 I fell, and hard, for the hints of fish sauce, the new (to me) spices, and the approach of using fresh and lightly cooked vegetables in each dish.  But what I fell deeply in love with was the peanut sauce served with the beef satay.

My Thai cooking at home is limited to two peanut noodle dishes.  One is a pesto-like mixture made of crushed peanuts, garlic and scallions seasoned with peanut butter, soy sauce and Penzey’s Bangkok Blend spice mixture.  As a side dish, these noodles marry well with grilled pork tenderloin or chicken breast, a boldly spiced foil for a simply-prepared, versatile meat.

The second type is more of a main course of cold noodles dressed with the peanutty satay dipping sauce I first tried in Chicago.  This sauce is creamy and unctuous, just the kind you will find on the table of a place like Thai 55 served in small portions, in small shallow dishes, next to piles of skewers of grilled meat of shrimp.  With or without meat or fish, fresh noodles napped generously with the satay sauce are filling, rich with unusual and complex flavors, yet also comfortingly familiar.

These are the noodles I thought of when I spied Heron Pond’s green beans.  This week’s beans, like last week’s crop, were beauties: deep green, long, slim; fresh, unwilted, unblemished.  Clearly the vegetable to add to the peanut sauce noodles, and in the Thai manner, cooking them only until crisp-tender.

I can’t claim this is authentic Thai.  My recipe for the peanut sauce grew out of a recipe belonging to Shelia Lukins.  I made changes to her sauce recipe at a time when I didn’t have access to some of the ingredients she included in the one from the All Around the World Cookbook.  Everyone here likes the taste of the recipe I ended up with, so I have stuck with doing it my way.  As a reminder of the satay dish from whence they came, and to use more of my CSA bounty, I serve the noodles with a dish of fresh sweet and sour cucumber pickles.

Although it is served cold, the flavors of the peanut sauce are pronounced.  There are two kinds of heat from the red pepper flakes and the ginger, sweetness in the peanut butter that’s been given a little boost of sugar, smoke from the sesame oil, tartness from the rice wine vinegar, and salt from the soy.  Pair all this with the crisp clean taste of green beans and the coolness from a cuke, and you’ll be pleased by many taste and texture sensations.  And yet everything is in balance.  I think, anyway.

Make this cool but satisfying dish on a hot night and the rewards are twofold: you’ll barely break a sweat, yet your family or guests will feel well fed.

Vegetables as fresh as the farm’s green beans will need little in the way of cooking, a plus on a day when the last thing anyone wants to do is fire up the oven or range for any extended period of time.  Fresh pasta, too, cooks quickly.

The pickles practically take care of themselves in the fridge.

The sauce only requires a blender.

For the peanut sauce: 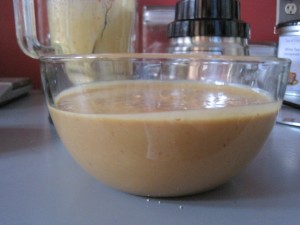 Place the soy sauce, rice wine vinegar, water, sugar, ginger, and garlic in the glass jar of a blender.  Process on high speed for about a minute or until the garlic has been pulverized and combined into the liquids.  Add the peanut butter and red pepper flakes and process again on high until smooth, about 30 seconds to a minute.

With the blender set at low and the motor running, slowly add the oils in a stream through the opening in the blender’s lid.  Blend until smooth.  The sauce will have a thick but pourable consistency.

Transfer to a bowl, cover, and keep at room temperature until ready to use.  (If not using right away, the sauce may be refrigerated for a couple of days.  Bring it to room temperature before using. 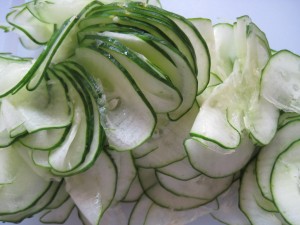 Thinly slice your cucumber by hand, or slice the cucumber wafer-thin using a mandoline.  Place these slices in a glass dish and set aside.

Heat water in a small saucepan on the stovetop, or in the microwave for 2 minutes on high speed in a microwaveable bowl.

Add the sugar and salt to the heated water and stir to dissolve.  Add the vinegar and stir.  Pour this over the sliced cucumber.  Cover and chill in the refrigerator until ready to serve.

For the green beans:

Place the trimmed beans in the steamer basket, cover, and turn the heat under the pot to high.  When the water starts to boil, turn the heat down to medium or medium low for a good simmer.  Beans will take only a few minutes to reach crisp-tender but timing depends on the size of the vegetable.  The only way to tell if they are done is to start tasting after about 2 or 3 minutes.

When the beans are done, carefully remove the steamer basket and rinse the beans under running cold water for a few seconds.  Then plunge the beans into the ice water bath to stop the cooking process.  Your beans will thank you by retaining their beautiful crispness and deep green color.

After a few minutes, the beans can be removed to a strainer to drain.  Set aside.

Bring lots of water to boil in a large saucepan.  When the water boils, add about a tablespoon of salt.  Add the noodles, loosening them up as you add them to the water if they at all clumped together.  Stir frequently as the water comes back up to the boil and continue to stir as they cook.  Fresh noodles, depending on the width, will take about 2 or 3 minutes to cook to reach al dente.  Begin tasting after 2 minutes.

When cooked, drain the noodles and run them under cold running water until cool to touch.  (Note: For most hot pasta dishes, you don’t want to rinse your noodles, thereby rinsing all that starch that helps a sauce stick.  But because this dish will be served cold, sitting on your table in an already thick sauce, rinsing the starch off is necessary.)

Drop the rinsed pasta into the cold water bath for a couple of minutes then drain.  Set aside to drain for assembly. 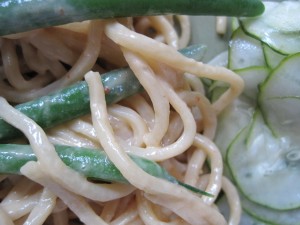 Place the noodles into a large serving bowl.  Pour about half the sauce over the noodles and toss to combine.  You won’t need to use all the peanut sauce for saucing, but more like one-half to three-quarters of the batch.  Save the extra for serving with grilled meat or shrimp the next day.

Top with green beans and toss them in gently.

Serve with a generous spoonful of the pickled cucumber slices on the side.

(Note: Friends with food allergies wrote to me this morning to let me know they made this meal last night, successfully replacing the peanut butter with Sunbutter – a sunflower seed product – and the resulting dish was delicious.  They added one extra tablespoon of the Sunbutter and also added a little more ginger.  I encourage everyone to make these kinds of  experiments to suit diet and taste.)