There is a moment while unloading the CSA crate I am given at Cider Hill when I feel like Mary Poppins unpacking her carpetbag after moving into the Banks household.  Remember?  Jane and Michael, her charges, watch with open mouths when the new nanny removes from the ordinary-looking case an umbrella, a floor lamp, a rubber tree plant and more.

Wednesday’s ordinary-looking yellow plastic crate is like that carpetbag: magically bottomless.  Lift out a head of lettuce, there are a couple of trees of broccoli hidden beneath.  Remove the broccoli, a bag of peas is revealed.  Pick up the bag of peas and voila, five green and yellow summer squashes.  Two tomatoes rest underneath a second head of lettuce.  So does a bunch of scallions.  A cucumber.  On and on until finally, almost escaping notice (because by this time my eyes are dazzled by the sheer volume of produce already unpacked), a half pint box of vibrantly ruby and magenta raspberries, their cardboard box fitted neatly into and buffeted by a corner of the crate.

I am a berry picker at heart.  Once upon a time when I could coax my young children into the car for adventure rides (back when the promise of an adventure ride with me was fun for them), we would drive to u-pick farms or walk to the blackberry thickets growing wild at the bottom of our street, trimmed plastic milk jugs in hand, and start picking.

Strawberries, blueberries, blackberries, raspberries – we would pick and pick and pick, coming home with many quarts of berries.  Caught up in the task and the tasting, the children never balked or claimed boredom.  Myself, I found the picking rhythm soothing, either a time for emptying my mind of everything or a time for filling it with flights of imagination.

In those days I would reserve a few cups of the berries for pies or shortcakes or muffins or simply for eating out of hand.  The bulk of the berries, though, ended up as jam, lots and lots of it.  Another comforting rhythm, jam-making.  A purposeful process: gathering fruit at the beginning, cooking it in the middle, followed by a very satisfying canning end, the countertop laden with glistening jars, fruit turned into richer hues and stickier, sweeter versions of themselves.

I rarely have time to preserve anymore.  Which is fine because I can no longer dedicate hours to picking fruit either.  Most of a day’s hours are spent juggling four peoples’ schedules and activities as well as getting written work done.  These are the choices we make about time spent and, compelled to do certain things, we often leave behind the other possibilities.

Fortunately I have days when baking is very much a part of my work.  Baking, like preserving, is a start-to-finish process, but one that takes a smaller time commitment.  Baking is nearly as satisfying, especially so when inspired by a tiny box of gorgeous and plump raspberries that someone else, someone who has decided their time will be spent farming, picked for me.

This week’s item, the raspberries, came from my Cider Hill CSA share.  To have enough fruit to bake with, I added some blueberries (also in season now), and these came from the farm’s store.  Raspberries and blueberries complement each other well I think.  Cultivated blueberries are plump and sweet and delicious, but I find they lack a bit of the tartness that the smaller wild blueberries possess.  Raspberries add that pucker.  So does a little lemon.

The original recipe came from a back issue of Bon Appetit magazine, and I’ve only made few changes.  The cake is very moist, flavorful and sticky with an upside down cake’s signature brown sugar caramel, and is fine on its own as a coffeecake.  But to bring out the lemon flavor and make the cake dessert-worthy, I like to fold a little lemon curd (homemade if you have time to do it; it’s so much tarter than purchased!) into freshly whipped cream and serve a little of this on top of each slice.

Combine the brown sugar and butter in an 8 inch square cake pan (Bon Appetit recommends a non-stick pan).  Put the pan on the stovetop over medium heat to melt the butter and sugar.

Stir constantly until the sugar melts and the mixture is bubbly and well-combined.  Carefully remove the pan from the burner and place it on a cooling rack to cool while the oven preheats.

After about 15 minutes of cooling, if you haven’t used a non-stick pan,carefully spray the pan’s sides with non-stick spray, or gently butter them using a some butter on a piece of waxed paper.  When finished, sprinkle the berries, raspberries first then blueberries on top, evenly over the syrup in the bottom of the pan.

Sift together the cake flour, baking powder, and salt in a small bowl and set aside.

Combine the almond paste, sugar, and lemon zest in a large mixing bowl or in the bowl of a stand mixer fitted with the paddle attachment. 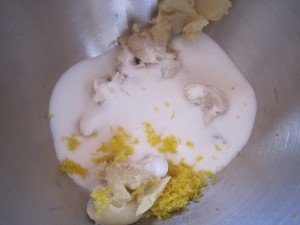 Mix until everything combines and looks like coarse sand or crumbs.  Add the butter to the mixture one piece at a time, mixing well and scraping down the side after each addition if necessary.

After the butter is incorporated, add the eggs one at a time, mixing well and scraping down the sides of the bowl after each addition.

Add the dry ingredients and blend only until the flour is incorporated and the batter is smooth, scraping down the sides once.  Spoon batter over the berries in the cake pan, spreading the top gently until it is even.

Bake the cake for 40 – 45 minutes, or until a cake tester inserted in the center comes out clean.  When done remove the cake from the oven and set it to rest on a cooling rack for a minute.  Run a spatula or knife around the edges of the cake to free it from the sides of the pan.

After the minute’s rest, place a large platter over the top of the cake pan and invert.  Set the platter and pan down on the counter and gently shake the platter back and forth to loosen the cake from the pan so that it drops down onto the platter.

Let cool for at least 30 minutes before cutting and serving.

Baker’s note: I made this cake twice.  In round two, when the cake was done and inverted over the platter, a lot of dark purple berry juice puddled on the platter around the cake.  Some berries are just juicier than others, and the cake as written uses a lot of very fresh ones.

Still, I didn’t want the cake to get soaked with the juice so I simply tipped the platter, supporting the cake with a spatula to prevent it from sliding, and drained the excess juice off back into the baking pan for an easy clean up.  No ill results to the cake (as you can see, cake itself when sliced into is what it should be: a creamy butter yellow), so don’t panic if this happens to you.

Here are a couple of tips in case you have to deal with this juicy situation:

Since this isn’t a longstanding family recipe like many of my others, I continue to play around with it.  So check back for any updates or tips.  In the meantime, don’t let the possibility of a little berry juice stop you from trying this stunningly colorful, lemon and almond flavored dessert!

← Cooking from the Farms: Pick of the Produce
Quick Cucumber Pickles →

3 thoughts on “Blueberry-Raspberry Upside Down Cake”